American Bucking Bull Inc. (ABBI) is sad to announce the passing of 28 Shaft (E-J Bucking Bulls/GO). The great bovine last bucked at the Ty Murray Invitational this past weekend in Albuquerque during the Championship Round, bucking off World Champion Guilherme Marchi.

A short round standout,  Shaft was only ridden three times during the course of his career. JB Mauney (89.25), Matt Triplett (90.5) and Renato Nunes (89.75) were the three PBR stars who were able to make the whistle atop the great black bucking bull.

Shaft started his career in the ABBI's Back Seat Buckers program in 2012 as a Futurity bull where he won $20,000. He was the first graduate from the program to receive an invitation from PBR Livestock Director Cody Lambert to buck at the World Finals. He made his debut there in 2014 at age 4.

“Having a bull selected to buck at the most prestigious bull riding competition in the world is an honor and the dream of every stock contractor," said owner Excell LaFayette Jr.at the time the news was announced.

"Shaft made all of us so proud," shared ABBI Executive Director Jay Daugherty. "He did well in the Back Seat Buckers program, placing fourth at our first World Finals and then went on to become a favorite of the cowboys on the Built Ford Tough Series. Our condolences go out to his owners Excell and Josephine, who were like members of the ABBI family and some of the strongest supporters of the bucking bull industry."

Shaft had no known health issues and his death came as a shock. "When we got home yesterday (from Albuquerque), he went to his pen," said veteran contractor Gene Owen who hauled and cared for Shaft.  "This morning I knew something was wrong and by the time the vet got here, he had already passed."

"We are sad of the sudden passing of our bull Shaft," said LaFayette. "He's performed well since his participation in the BSB program of the ABBI. His performance on the BFTS has continued to get better and better where he has become a short round or championship round bull.Our goal is to continue to participate in the PBR BFTS. We thank all the fans and supporters of Shaft."

An autopsy was already performed by a veterinarian and showed bruising on the interior and exterior of his heart that would be consistent with a massive heart attack.

The outstanding athlete came from Cindy Rosser's breeding program. His father was W45/2 Joe B Water and his grandfathers were the great bulls Whitewater Skoal and Werewolf. 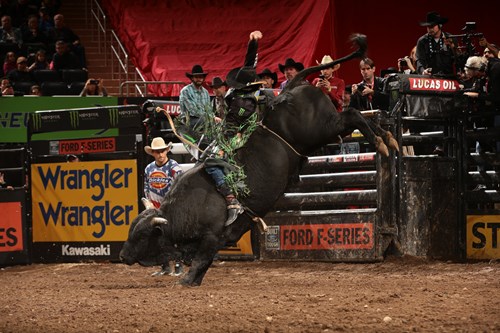