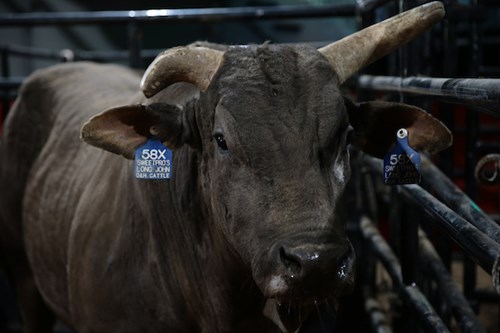 American Bucking Bull Inc. is saddened to learn of the passing of their 2014 Classic World Champion and 2015 PBR World Champion SweetPro's Long John. The bull belonged to Dillon and H.D. Page and wore the legendary Rockin P Brand and the herd number 58X.

On Thursday, Long John was playing in an exercise pen and "acting like a calf" according to owner H.D. Page. However, by the next morning Page could tell something was wrong so he took him to a vet in nearby Newcastle, Okla.

"I assumed it was something simple," said Page. "He spent the weekend in Newcastle with what we thought was a gut issue."

A lack of improvement prompted a move to OSU where it was determined Long John had a perforation of his intestine. Surgery was scheduled for Tuesday morning. The immediate concern was for his post-surgical recovery since an infection was already setting in.

The great bull took a turn for the worst and died at 6am, just hours before his surgery was scheduled to start.

A philosophical Page rationalized, "If you are going to own livestock, then you have to be prepared to own dead stock." As true as that statement is for any stock contractor, the typically stoic Page was visibly upset by the loss.

"You never want to lose one, but I can think of 500 I'd rather see go than him," said Page. "It never gets any easier, especially with ones that you get close to. These animals are our livelihood- their success is what feeds our family. But these animals that you go down the road with and see everyday- they also become part of your family. It seems like it's always a really good one that you lose unexpectedly like this."