RIP Roy
4/1/2009- 3/6/2016
The bucking bull industry lost a superstar yesterday with the passing of Moreno Bucking Bull's Roy 1073/9.
In a sport where the bucking bulls have as many fans as the cowboys, the excitement of the BFTS in Phoenix turned suddenly somber on Sunday when Roy injured himself during the championship round.
The Julio Moreno bull was not only a beloved member of the stock contractor's family, but a bull respected by the cowboys, adored by the fans and admired by Moreno's peers.
Tragically, Roy's injuries were not just career ending but necessitated that he be put down.  The welfare of their animals always comes first for the Morenos, and it was decided after consulting a veterinarian that this was the correct decision.

"Unfortunately, Roy's injuries this afternoon in Phoenix were insurmountable," shared Kindra Moreno yesterday. "We love Roy and knew that it would be in his best interest to ease his pain. These bulls are incredible athletes and loved by our family, friends and fans. We cannot thank the many of you who have reached out to us during this very difficult time. He went out on top, doing what he loved to do best. He was our little engine that could."
Cooper Davis was the last cowboy to leave the chute with Roy in the championship round in Phoenix. "You never want it to happen to any of them, but when you have one that is great like Roy and you lose him to a freak accident its extremely tragic. There is nothing anyone could have done about it, today was his day to go but that doesn't make it any easier for Julio. He was a great bull that was only getting better and he goes out on a high note and will always be remembered that way."
Roy was a contender for World Champion Bucking Bull last year. In 2014, he was the runner-up to that prestigious title. A brother to Bushwacker (the animal many people consider the greatest bull of all time), Roy had become a superstar in his own right. The 6-year-old bull looked to be in the running again this year for PBR's most prestigious bull title; he earned a 46.5 bull score this weekend.
With an average score of 45.1 in the PBR Championship Round, he was almost always in contention for Bull of the Event anywhere he competed. Only three men had ridden the great bull on the Built Ford Tough Series:  Fabiano Vieira (90.25 points), Eduardo Aparecido (93.25 points) and Cody Nance (89 points).
A son of the great Reindeer (out of Naccarato bloodlines), Roy's dam was Moreno 107/3. She was a daughter of the great Whitewater Skoal, who in turn was out of the legendary Oscar's Velvet.
Most fans first took notice of Roy at the 2013 ABBI Classic World Finals where he was matched up against Nance and Stormy Wing (who bucked off at 6 seconds). The Classic Finals are held in conjunction with the PBR and after his performances in Round 1 and Round 4 of the World Finals, Roy's third place finish left a lasting impression on the crowd.
Over the last four years Roy delighted crowds in arenas coast-to-coast, while challenging cowboys to rise to the occasion and make the whistle atop his back. He will be remembered and missed. 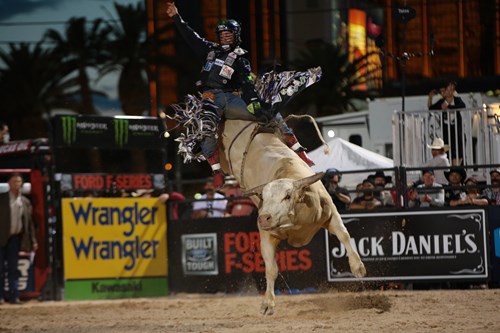