ABBI pays out over $500K at annual American Heritage event in Duncan, Oklahoma

ABBI pays out over $500K at annual American Heritage event in Duncan, Oklahoma

Duncan, Oklahoma (June 17, 2019) – American Bucking Bull Inc. (ABBI) hosted their annual American Heritage event in Duncan, Oklahoma, at the Stephens County Expo Center for the fifth consecutive year with event production help of Jim McLain’s TwoBulls Group. Just under 400 bulls competed in the Heritage overall, which is the highest number of participants yet.

“We had another successful weekend in Duncan, Oklahoma with our American Heritage event,” said ABBI President Jay Daugherty. “It’s amazing to see the bucking stock improve year in and year out, with our Contractors stepping up their game and putting some of the most top-notch bovine on display in this competition. Thank you to the city of Duncan for supporting us each year and to Jim McLain and his crew for running the show as effortlessly as they always do.”

Oklahoma native Stock Contractor H.D. Page of D&H Cattle Co. along with partners Tommy Julian and Joe and Nina Webb won the Heritage Futurity title with 705E Manaba. The two-year-old bull posted 93.2 points to earn his owners just under $75,000 in winnings. The Top 7 bulls in the event earned no less than 90 points apiece, while the Top 20 bulls produced a score of 89 points or above to qualify for a check. D&H Cattle also placed second with 8E- High Country (D&H/Flinn) at 92.4 points and took a third-place finish with Page 34E (Julian/D&H) with 91.6 points. 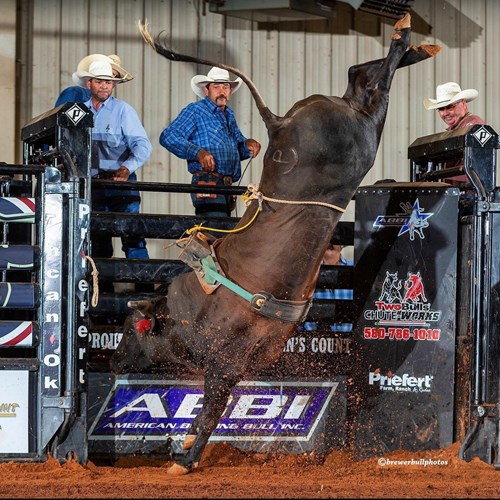 This event supplied the most difficult competition to date, with more 90-point scores and the bar set unbelievably high to earn a spot in the money. Over the entire event, 16 90-point scores or higher were recorded throughout the five class competitions, which marks the most 90-point performances of any American Heritage.

In the Heritage Yearling event, 32F Crooked W (D&H Cattle/White/Crook) took home more than $21,500 for his first place 90-point performance. Payson Parker and D&H Cattle’s Patches won the Junior Futurity with 90.6 points and a $2,800 payout. 15E Cornerstone earned the top spot in the Cowgirl Futurity with 92.4 points and more than $2,000.

“Every year that I have produced the American Heritage my first thought after the event is, how will we top this?” McLain said. “And every year we manage to, both in competition and production. I have an amazing team that never ceases to raise the bar year after year! My hat is off to the bull owners, trainers, breeders, the ABBI staff, and my team. Together they elevated the game one more time.

Yearling and Futurity events are for bulls one and two years of age, respectively. They buck with a 23-pound weighted box (“dummy”) on their back which is released via remote control. Along with putting on competitive events for bucking bulls that pay out over $2 million annually, ABBI runs the largest DNA bucking cattle registry in the world and is a sister organization to PBR (Professional Bull Riders, Inc.), based in Pueblo, Colo.