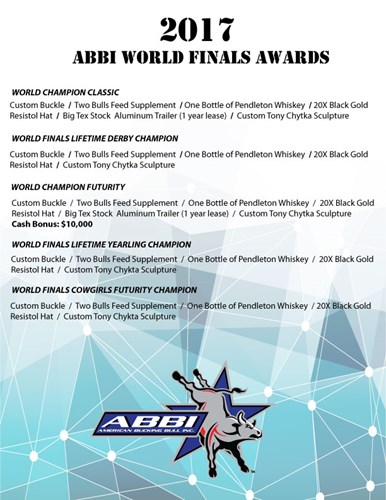 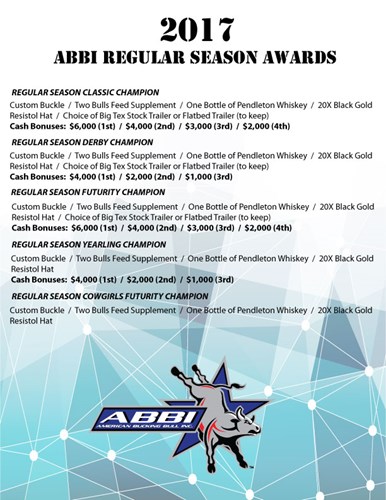 PUEBLO, Colo. (Dec. 12, 2016)- The 2017 World Finals and Regular Season Awards were announced today by American Bucking Bull Inc. (ABBI). The bulls that finish atop the regular season standings (based on points for all Futurity level bulls and money for the other divisions) will receive a variety of valuable prizes and cash bonuses. Prizes were also announced for the bulls who come out on top in Las Vegas.

“We've got a lot of money to be won this upcoming year,” said ABBI Executive Director Jay Daugherty. “Thanks to the support of our members and our fantastic sponsors, we are able to recognize and reward the top bulls of both the World Finals and Regular Season.  I look forward to seeing the talent that emerges over the course of the season in the race to Las Vegas."

In addition to the prize purses, the World Finals Classic, Derby, Futurity, Cowgirls and Yearling Champions will all receive a custom buckle, 20X Black Gold Resistol hat, custom Tony Chykta sculpture, TwoBulls Feed Supplement and a bottle of Pendleton Whisky. The Classic and Futurity champs will also get a one-year lease of a Big Tex trailer. New to the 2017 season will be an additional $10,000 bonus to the Futurity winner.

The Regular Season Classic, Derby, Futurity, Cowgirls and Yearling winners will all receive a custom buckle, TwoBulls Feed Supplement, 20x Black Gold hat and a bottle of Pendleton Whisky. The Classic, Derby and Futurity winners will also get to choose between a Big Tex stock trailer or Big Tex flatbed trailer to keep.